News from the world of MEDER

Kurt Meder GmbH has been producing springs for 60 years

To the moon with technology from Schwenningen – and not only that: precision springs from Schwenningen have been doing their work all over the world for more than half a century now. Traditional Schwenningen company Kurt Meder GmbH is celebrating its 60th anniversary. Almost unparalleled: up to 20,000 springs are manufactured from one gram of material.

Schwenningen. The 175 employees of Schwenningen company Meder recently celebrated 60 years of know-how from Villingen-Schwenningen at the Stuttgart Beer Festival. This week, on 11 November, will see the spring manufacturer's official anniversary. Over 60 years, the company founded by Kurt Meder has evolved into a respected and competitive manufacturer of precision products for many industries. In various applications, Meder is now one of the leading manufacturers in Europe. "Every company history is based on the commitment and skills of each and every employee. We are proud of our entire team and want to thank all employees, who together with us are writing the history of the company and will keep Meder on track in the future", says Meder CEO Magnus Mauch.

It all began exactly 60 years ago in the basement of a house at 23 Richard-Wagner-Straße in Schwenningen, when Kurt Meder, born in 1922 as the son of a watchmaker, founded his own company after training as a precision machinist and passing his master craftsman's exam. After five years of production of technical springs in the basement of the family home, Meder moved into his first factory building at number 4 Weidenstraße. With the support of his wife Hannelore, the one-man business became Kurt Meder KG in 1967, and eventually Kurt Meder GmbH in 1991. A name that today still stands for precision springs from Schwenningen. The quality products from Baden-Wuerttemberg caught on around the world. By 2002, the veteran Schwenningen company had had to expand the location at Weidenstraße nine times. The company grew and grew. But to restrict Meder's life's work only to "Meder the spring-maker", as he is affectionately known among employees and in Schwenningen, would not be doing it justice. For ten years, Kurt Meder was a member of the board of VDFI, the association of the German spring industry. Until 2002, the enterprising company founder worked in the background as CEO before finally retiring in old age from day-to-day operations twelve years ago. His majority interest in Kurt Meder GmbH has since been owned by the Kern-Liebers group in Schramberg. Kurt Meder died on 6 February 2008 at the age of 85.

Even today, 60 years later, the success story continues to be written in three interconnected buildings in Schwenningen's Weidenstraße: in a production area of around 8,000 square meters, 250 spring coiling machines are used to manufacture ten million precision springs every day. According to CEO Mauch, the smallest spring has a wire diameter of 0.03 mm. "From one gram of material, we can manufacture up to 20,000 springs, which is one of our unique selling points", explains Mauch. That makes the company one of the leading manufacturers in the mini and micro sectors in Europe. "We export more than half of what we produce throughout the world," continues the CEO. The company now manufactures for major international clients in Asia, America and Mexico, including locally. By now, almost everyone has probably come into contact with a spring from "Meder the spring-maker". "Our springs are found in every part of the car, from the electric seat adjustment system to the gear shift to the ABS braking system. Not to mention in switches, furniture fittings, hearing aids and pacemakers", adds Mauch. And something of which the Schwenningen spring manufacturer is particularly proud: the special springs have even been to the moon, in space cameras that went with the first Apollo flights. In its anniversary year, there is only one direction for the development of the company – up: "We are delighted to have achieved record turnover of over 20 million euros in our anniversary year. With our highly dedicated employees, first-class modern machinery and a global infrastructure, we are very well prepared for the future", says Mauch. A success story – made in Schwenningen. 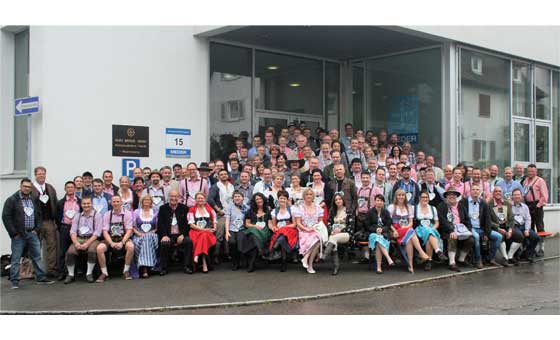